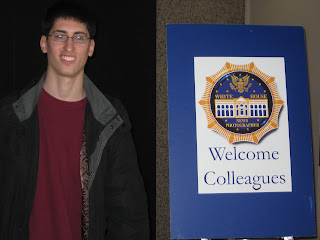 I went to the judging on Sunday and saw the “Portfolio,” “Photographer of the Year” and the “Political Photo of the Year” categories. Throughout the day I saw hundreds of photos and when I saw many of them, I would ask myself, “What is the first thing that I look at?” We discussed this in class and thinking about it helped me understand the photographer’s goal. Another element that caught my attention was how to conclude a story. One entry had photos of an empty desert, and the final picture was a yellow sign with the word “End.” The judges noted that it was a fitting way to end a story, and I agreed. The best part of the afternoon came during “Political Photo of the Year.” The winning photo was Ron Paul making a speech with a US flag in the background. In the crowd, someone was making a fist, and a judge said capturing the moment was a gift from the “photo Gods.” Marci Nighswander said that without the fist, she would not have voted it as the winner. Realizing that one moment can transcend a “good” photo to a “great” photo was thrilling. At the end, Nighswander made a statement about people submitting black and white photos instead of color photos. She presumed that because there have been black and white photos that won in the past, photographers are cautious about using color photos. Nighswander said that most of the time, the photos would have won either way. I think that if the WHNPA contest wants more color photos, they should issue a statement about this issue that will reach an audience. I enjoyed seeing photos from some of the best in the area, and it was a learning experience that will be useful as we dive into the photo “slice” of this class.
Posted by Adam Kuhn at 12:22 AM