Inside look at the WHPA Judging- Alana Yzola 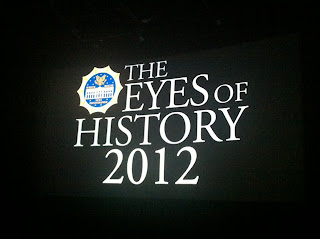 On Saturday, February 26, I had the opportunity the view the WHPA Judging at the National Geographic Museum in DC. There, I observed the critiques of pictures in the sports category and the category covering an inside look at prominent members of the government. The judging made me look at photography in a completely different perspective. The sports category had me completely scratching my head at the comments that the judges were giving. The final pictures included a jockey winning a race, a busty cheerleader teaching kids a dance routine, a young boy who lost a sporting competition, and a woman who fell during a track meet and had other women assisting her. In my mind, I believed that the image of the woman who fell during her track meet was the most powerful. To me, it showed true emotion of the event, the look of despair and almost pain she had when she fell. I thought it was powerful because it showed so many other women helping her by holding her up and offering her water. It captured the mood perfectly in my opinion. However, the judges complained that the picture was “too busy” and chaotic. I thought that the chaos of so many different things going on in the photograph at once depicted the chaos of helpers rushing to the fallen runners’ aid. It shocked me that it was put last, and the picture of the voluptuous cheerleader was moved to third. It didn’t make sense since the judges at one point found so many issues with the photo, including failure to crop some of the girls on the left, her overexposed breasts, a child appearing to be looking at the cheerleaders’ behind, and the debate over the overall message of the photo. They were even particular with the winning photo, an action shot of two football players and their coach cheering after a touchdown. They complained that the coach’s white note pad had a corner that was slightly cut off. It was remarkable how much detail they were able to analyze and criticize. 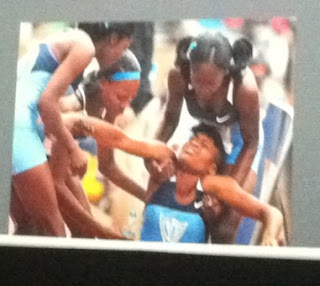 (The photo wasn’t this blurry; I had to zoom in on the image on my phone) VS. 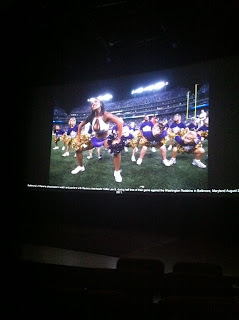 The government category also surprised me at how critical the judges were. For example, one photograph actually got disqualified because the photographer left her name in the caption. One picture that made top three that shocked me was the photo taken of Michelle Obama shopping at target. Compared to the other pictures in the category, the picture was pretty ordinary aesthetically. It was a straight shot with no interesting angles. It wasn’t even as crystal clear as the other photos. Originally, the photo wasn’t even going to make it past the first round of judging, but the female judge fought to keep it in due to its content. This completely perplexed me. In the last category, they put a busty cheerleader above an angst ridden track runner because of the aesthetic elements of the way the photograph was taken, but now a regular point and shoot image of Michelle Obama made third place because the photographer was simply in the right place at the right time and captured the first lady shopping? 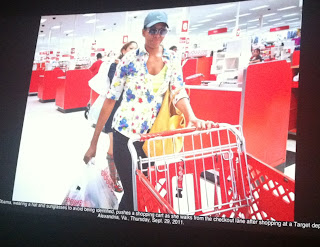 One photo that I did agree on was the photograph of Ron Paul. It was black and white, and was at an angle that made Paul look small in comparison to the flag. What made the photo perfect was a lone fist that was next to him. Although a few of the judges wanted the photo to be in color, I liked the dramatic look of black and white. I agreed with the judges in their final decision of the photo and also felt it was the perfect choice for first place. 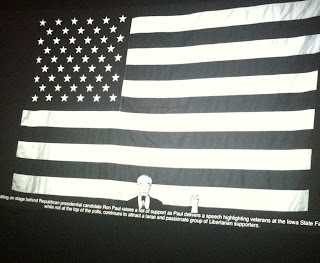