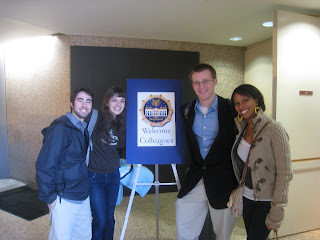 The WHNPA contest was definitely worth the frigid-cold wait for a train to DC. By the end of my visit, I was left with a new perspective of photojournalism—no pun intended.
The beginning of the trip was disappointing, however. I’ve recently taken an interest in multimedia and have considered concentrating on that field in my career. When I learned there would be a multimedia judging, I thought it would be a good idea to check it out first, and hopefully learn something new from the critiques. After watching between 30 seconds and two minutes of a piece, (regardless of the length of the piece) they claimed they had seen enough, and moved on to the next multimedia piece. I felt that this approach was too rushed, and didn’t give an of the contestants a fair chance. What if a multimedia piece like the one about the “Miss Outdoors” pageant—one that seems ordinary at first but later has a surprising twist in the middle—were featured? Judging on the first few seconds of it, “Miss Outdoors” would not have lasted very long.
Possibly because of their quick looks over the multimedia portion, the judges debated not over the quality of the works, but whether or not they were really multimedia. That factor really should have been dealth with before the judging, and made the entire event appear thrown together. Needless to say, I did not stay for long.
The photojournalism contests made up for what the others lacked. I walked in during a contest for sports-related photographs. I’d rarely analyzed a photograph so thoroughly until that point. From one angle, the composition of the image was considered. Do the viewers’ eyes move around the image as the photographer intended? Was color really necessary? I hadn’t thought about the importance of keeping a balance between utilizing empty space and not having an overly-busy image. A photograph featuring celebrating Redskins players and their coach went from a colorful, energetic image to a compilation of commentary about rule of thirds, importance of making the viewer feel part of “the moment” just by looking at the coach’s face, and analyzing where to look first before taking in the entire image.
Social commentary was considered, as well. One photograph in particular comes to mind: a professional lcheerleade3r wearing her revealing uniform was leading a group of young girls in a cheer. On one level, it was hilarious because of the staring prepubescent girls (who were all appropriately dressed in t-shirts). On another level, it was a commentary on society’s views of women. On another, it told about girls’ body image issues. I felt like they were analyzing a novel, not an image, and I liked how they really dove into details in the photographer’s work.
After the photojournalism contests, I got a chance to chat with some classmates and Heidi, a friend of Professor Jacobsen, and knows far more about photojournalism than I do. It was helpful to hear some opinions beyond what the judges had to say. When the class moves on to the photojournalism aspect of multimedia, I will definitely keep this experience in mind.
Posted by Adriana at 12:46 AM