A Day With the WHPA

I attended the photojournalism exhibition staged by the White House Photographers Association in the National Geographic Museum last weekend. I enjoyed watching the different perspectives on the societal events the reporters covered. While I appreciated the opportunity to sit in the company of such accomplished journalists, I can’t help but feel somewhat slighted. The one operating the computer showing us the videos during the round I watched cut every video off after one minute. I wasn’t able to get caught up in the videos and learn something about multimedia journalism, which is what I wanted out of the day. But I wasn’t able to engage myself in those journalists’ perspectives. The judges seemed to be able to get what they needed from the short clips, but I can’t help wondering how their perspectives would have changed by watching the entire thing. There could have been something after the first minute that they would have liked or disliked, but the video operator made it so that the journalists’ hard work was judged on the video’s first minute. I, as well as the judges, lost out to a certain extent.
That said, I learned what a good multimedia piece (or the first minute of one) should look like. I saw the opener of a piece on a factory that employed at-risk teenagers or juvenile delinquents, having them perform manual labor for a salary so they were kept away from the streets. It was very well put-together, and the opening shot- an African-American teenager telling about his brushes with the law over a close-up still of his face- was a powerful introduction. 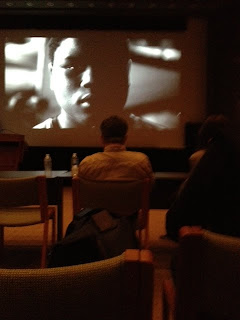 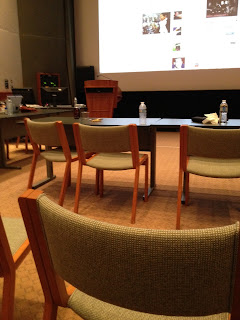 Posted by Jason Benscher at 4:24 PM