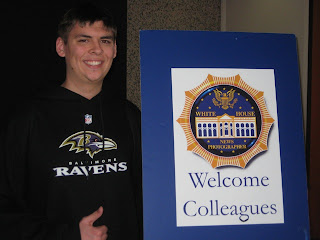 Due to my sisters relay team making states for swimming, I was unable to make it to the Saturday session of the White House News Photographers Association photo judging. So around 8 a.m. on Sunday, I pulled myself out of bed (no small feat) and headed down to the National Geographic building.
My timing was perfect, as I arrived just as the news picture story judging session was beginning. The other two sessions I witnesses were the sports picture stories judging and the political portfolio judging.
One thing I did notice was that judge Ed Kashi used the word picture repeatedly. I just found this noteworthy because Tim said that this isn’t something that professionals usually say.
The judges were very critical of the photos. Kashi was incredulous about what he called, “the lack of commitment to follow through on telling stories,” by most of the photographers.
He went on to question if there were any photographer’s left who were willing to go deep with a subject. He praised the few who spent the time and got the moments. To go along with this idea, the judges questioned why there was less focus on individuals in the submitted stories, and that it lead to a lack of intimacy.
The judges also questioned where the color was and why almost all the photos submitted were done in black and white. Judge Marcy Nighswander pondered whether this was in response to the wrong message being sent by the judging community. She also said that there was, “nothing wrong with real life.”
Another thing I noticed was that during the portfolio segment much emphasis was placed on the power of singles. The singles, said judge Bob Pearson, can change the perspective, and affects the stories around them.
Overall, I thoroughly enjoyed the event. I was fascinated at how quick the judges could analyze the photo. They brought up things I hadn’t even noticed in the image even after multiple viewings. Most importantly, I learned valuable tips about what makes good photojournalism.
Posted by Jace Evans at 11:05 PM