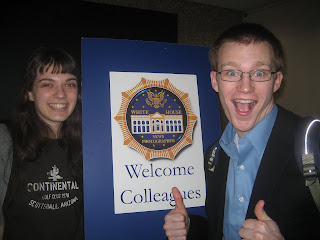 Upon arriving at National Geographic, we discovered the judges were on their lunch break, so we decided to eat as well. I originally just went with Adriana, but on the way there we joined up with some other classmates and we all went to Potbelly’s. Then we decided to check out the multimedia judging. Unfortunately, the judges were more caught up in whether a package fit into the “simple” or “in-depth” category rather than analyzing its content. Also, they only watched the first minute of each package, so right when you were hooked, they’d say, “Okay everyone got it?” and move on. Our group decided to move into the auditorium where another set of judges were critiquing still photos. This was much more exciting. There would be a category – the three I stayed for were sports, Washington insider, and presidential photos – and the judges would first select a number of photos they wanted to look at again (one judge needed to yes-vote it), the next round the photo would need two yes-votes to stay in, and then the judges would partake in a dialogue about what they liked and did not like about each of the remaining photos, finally picking a top three and assigning the rest “Awards of Excellence.” 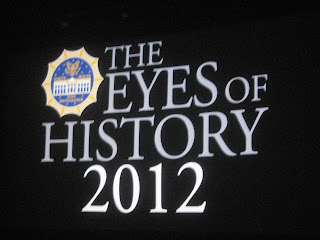 Hearing this dialogue will be very helpful going into the photo unit because now I know what professionals look for in published photojournalists’ work. I picked up on some key tips, such as framing and cropping, and viewed real life examples that illustrated these skills. Some of the photos were funny, others were aesthetically pleasing, and others garnered fear or sadness. Now I know to try to capture emotion in my photos and make my audience feel something when they view my image. 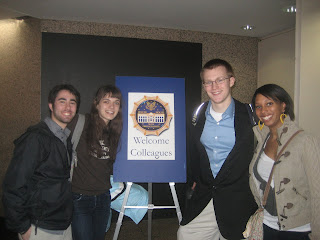 After we stayed for a few categories we decided to head back. But before leaving we met Heidi, one of Professor Jacobsen’s colleagues, and she asked us about our opinion on the presidential photos the judges chose. “Which do you think would look best on a book cover?” she said. After a little discussion we chose a photo of Obama with his eyes shut and a halo-looking circle framing his head. Heidi agreed and explained how she had to choose a book cover by that night! We were all pretty excited about having helped pick out a book cover. All in all, I learned a lot by going to the photo competition and it was fun seeing the variety of entries. I never actually knew the National Geographic museum was there, so I will have to go check that out another time!
Posted by Allison Gray at 10:51 PM